Whirlpool Corp. would NEVER allow a fair-minded atty. like this anywhere near Berrien County, Michigan 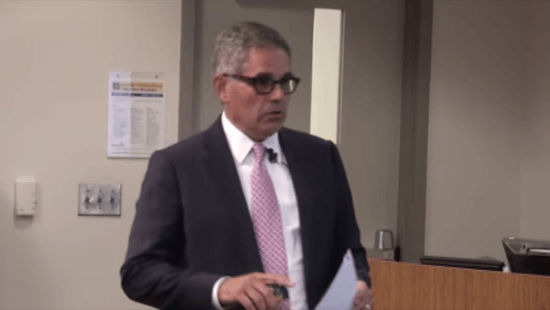 Larry Krasner ran as arguably the most progressive District Attorney candidate in the country. In May, he sent shockwaves throughout the Pennsylvania political establishment after winning the Philadelphia Democratic primary. And last night he defeated his Republic opponent Beth Grossman by more than 40 points in the general election to become Philly’s next DA—part of a broader wave of progressives elected to office.

In These Times spoke to Krasner about the significance of his campaign for local and national politics.
Your campaign website states, “The culture of the Philadelphia DA’s office must change” What exactly must change?
This is a culture that has been focused on trying to bring as many cases against as many defendants as possible, which basically means poor people, as possible. We have one public school after another closing in Philadelphia but we’ve got oh so many prison cells. The reality is that good public education prevents crime. Good drug treatment prevents crime. Good job training prevents crime. Good economic development and availability of jobs, prevents crime. But building more and more jail cells causes the cycle of poverty, it causes crime
How do you understand the relationship between street violence and the institutionalized violence of poverty?
Violence is defined narrowly in terms of people getting hurt on the street by being robbed, by being shot. It is also defined broadly in terms of the trauma that people suffer when they are poor, when they have no hope, etc. How is it related? We know that people who have been traumatized, people who have been neglected, people who have moved 50 times during their childhood because no one could ever afford the rent, tend to end up in jail. We have accepted a prevention model in public health a long time ago and we need to be willing to make that small shift and accept that in the realm of criminal justice.
You sued the Philadelphia Police Department 75 times. As District Attorney how will you hold police accountable?
Number one, you could stop treating them as if they are entitled to different treatment. It’s really not that complicated to treat rich people and poor people and famous people and unfamous people and people who wear uniforms and people who don’t the same. [...]