The ominous atmosphere of racism and criminal justice bias permeated the preliminary hearings, the trial and the sentencing phase

By Abayomi Azikiwe
St. Joseph, Michigan
Libya 360°
Berrien County Judge Sterling Schrock sentenced the leader of the Black Autonomy Network Community Organization (BANCO), Rev. Edward Pinkney, to 30-120 months in prison based on five felony counts of forgery by an all-white jury. The charges stemmed from a successful recall petition drive against Benton Harbor Mayor James Hightower who is perceived as a tool of the Whirlpool Corp. and the political power structure in the area.
Pinkney has been a longtime activist in Berrien County where Benton Harbor is located and his work in the state of Michigan has drawn national attention. This is the second time in seven years that the BANCO leader has been convicted on charges related to efforts to hold local officials accountable to the people.
Prosecutor Michael Sepic requested a 42-month sentence based on the previous convictions in years prior extending back to the 1980s. Atty. Tat Parish, who defended Pinkney during the highly politicized trial and sentencing, requested that the judge exercise discretion by sentencing the activist to probation.
Over 130 people sent letters to the Judge Schrock requesting that he set aside the verdict and release Pinkney. Although the jurist acknowledged the letters he also sought to minimize their significance.
Atty. Parish stressed that the letters came from notable figures from around the country. “Although these people may hold ideas that we may not agree with they are good people who say that the community needs Pinkney,” the defense lawyer told the court.
Outside the courtroom Parish told supporters of Pinkney that he appreciated the role they had played during the difficult trial. “A criminal appeal lawyer, one of the best in the state, will take over the case for the next phase.”
Activists present from various cities were outraged at what they perceived as a total travesty of justice carried out by the local courts. They pointed out that police who have been videotaped killing African Americans were allowed to go free while Pinkney had been convicted and sentenced to prison without any material evidence.
During the prosecution’s presentation of its case against Pinkney during Oct. and Nov., there was no eyewitness testimony that would implicate the Berrien County activist in the alleged crimes committed. Even though the prosecutor and judge said the evidence was circumstantial, there were no clear cut motivations articulated which would place Pinkney in a position to change the dates on the recall petitions.
No handwriting experts testified who could determine that it was Pinkney who changed the dates. A series of witnesses called by the prosecution stated unequivocally that they circulated the recall petitions based upon their desire to replace Hightower who opposed a tax measure that would provide corporate resources for the rehabilitation of Benton Harbor in the interests of its poorest residents.
The courtroom was full for the sentencing hearing while people lined the hallway during the proceedings which lasted for over two hours. Armed white Berrien County sheriff deputies stood up during the entire proceeding guarding the doors and during later portions of the hearing, one of the officers moved to stand behind the prosecutor.
Two other unidentified white men sat next to the prosecutor during the proceedings. After the conclusion of the hearing Pinkney was placed in handcuffs and taken into detention.
People had traveled to St. Joseph from around the United States. Ralph Poynter of the Lynne Stewart Defense Committee based in New York City was on hand for the sentencing. Delegations were also at the courthouse from Berrien County, Detroit, Ann Arbor, Chicago, Nebraska, East Lansing, among other cities.
Rev. Pinkney Addressed the Court
Prior to the sentencing Rev. Pinkney spoke to the court saying that he was not guilty and “would not admit to something I did not do. I am hurt that this jury convicted me without any evidence.”
He later turned to prosecutor Sepic pointing at him saying “you know I did not do anything illegal.” Prior to sentencing Judge Schrock lectured Rev. Pinkney saying that his sentencing is designed to send a message.
Although the judge said that people have a right to seek the recall of a public official, he then turned to sentence the community leader to a lengthy prison term. Later the judge accused Rev. Pinkney of misrepresenting the political situation in Berrien County.
The area has an extensive history of racism and police repression. Benton Harbor’s African American community faces conditions of poverty, unemployment and police brutality.
BANCO through its organizing efforts has exposed the corporate entities in the county in their mad drive to maximize profits at the expense of the most oppressed and exploited within this region of southwestern Michigan. The ominous atmosphere of racism and criminal justice bias permeated the preliminary hearings, the trial and the sentencing phase.
Supporters Protest Convictions as National Struggle Escalates 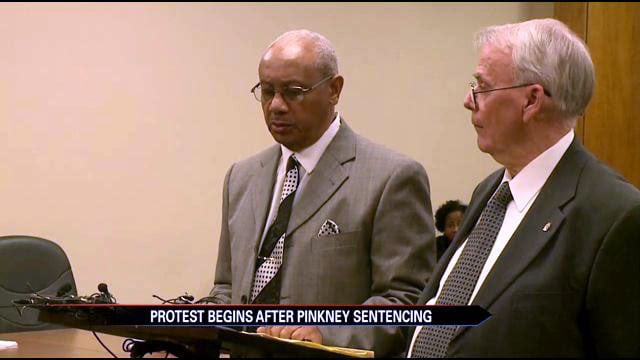 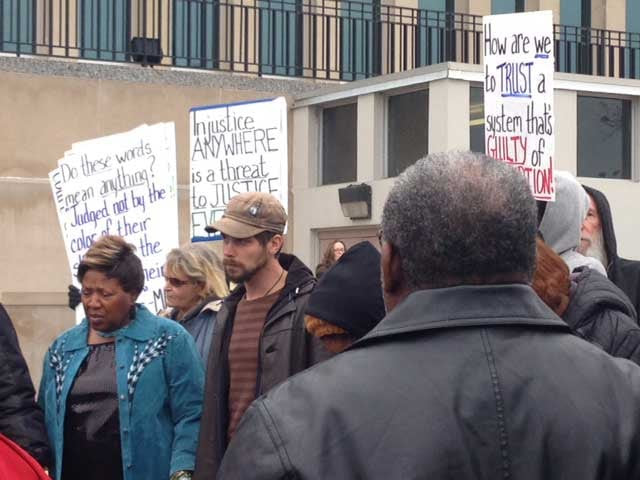 After the hearing concluded supporters of Pinkney stood and comforted Mrs. Dorothy Pinkney, his wife. When asked outside the courthouse about where her husband would be detained, she said that “I have been told nothing.”
In the parking area supporters held a prayer vigil, an impromptu press conference and demonstration. People began to chant “Free Rev. Pinkney.”
Soon enough police cars began to arrive on the scene. Security personnel from inside the courthouse came out and told protesters that they would have to clear the area where cars drove into the county complex to park.
Law-enforcement vehicles from the city police force and state police were deployed.
Activists and defenders of Pinkney placed the sentencing within the broader context of the racist attacks against African Americans from Ferguson, Missouri and New York City all the way to California. Since the killing of Michael Brown on Aug. 9, the U.S. has been hit by a continuous wave of anti-racist demonstrations and rebellions.
Since late Nov. and early Dec., these manifestations have taken an even more mass character where protesters have drawn the links between police repression, judicial misconduct, the grand jury system and the corporate rule over U.S. cities and suburbs. These demonstrations have closed down streets, shopping malls, highways and low-wage employment centers.
The blatant acts of the capitalist corporations and their agents in government are causing greater political consciousness and intolerance among African Americans and many people of goodwill. In Berrien County and throughout the state of Michigan, majority African American municipalities, including the largest city of Detroit, have been taken over by politicians operating on behalf of the banks and multi-national firms–where fundamental voting rights and due process guarantees have been terminated.
These efforts by the racist power structures in cities, states and at the federal level are taking place without a response from the oppressed and working people. The demonstrations which have drawn hundreds of thousands into the streets across the U.S. will increase in their numbers and militancy.
New alliances and organizations will emerge to provide a consistent and ideologically directed focus to the burgeoning struggle. The racist capitalist system can no longer hide from the penetrating analysis of the growing mass movement against racism and capitalist exploitation.
Developments in Berrien County, Michigan serve to illustrate the character of the current crisis and the willingness of people to resist this renewed onslaught by the ruling class.

Abayomi Azikiwe is the editor of Pan-African News Wire , an international electronic press service designed to foster intelligent discussion on the affairs of African people throughout the continent and the world. The press agency was founded in January of 1998 and has published thousands of articles and dispatches in newspapers, magazines, journals, research reports, blogs and websites throughout the world. The PANW represents the only daily international news source on pan-african and global affairs. To contact him, click on this link >> Email
http://libya360.wordpress.com/2014/12/15/civil-rights-leader-rev-edward-pinkneys-sentence-unjust-politically-and-racially-motivated/
Related:
Civil Rights Activist Rev. Edward Pinkney Convicted of Five Counts of Felony Forgery by Berrien County Jury
Rev. Edward Pinkney Speaks to the People of Detroit
Rev. Edward Pinkney Remains Under House Arrest in Benton Harbor
Rev. Pinkney Released From House Arrest (Update)