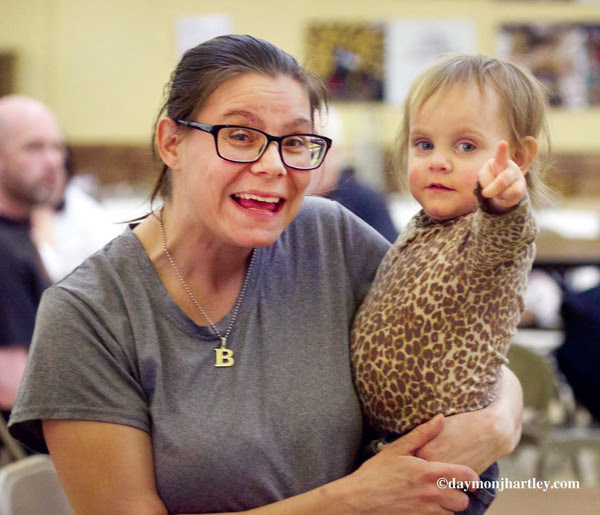 Rebecca Fritz, with one of her children, sounds the alarm about fascism in a talk at a protest against land theft and repression against leaders of the people in Benton Harbor, MI, a town run by the Whirlpool Corporation. PHOTO/DAYMONJHARTLEY.COM

Editor’s note: Rebecca Fritz, with one of her children, is sounding the alarm about fascism. She fights poverty every day, trying to raise a family on her own. She joined the bus to Benton Harbor from Detroit for a protest against the PGA and the lakefront land takeover by Whirlpool, Corp., because she recognizes the importance of the struggle there to the overall struggle against fascism.
BENTON HARBOR, MI — It’s nice to see how many people showed up despite the weather. I am always pumped by everyone’s enthusiasm. Our enthusiasm and fight for what’s right is all we have. I want to say something about fascism in America. Everything is being privatized. Everything comes down to the bottom line of profit. Our children are born into this materialism and it’s difficult to get them out of it. They see what other people have and want all these material things. Everything is a commercial.
I never met Rev. Pinkney, but heard about him. I could see that this is one of the towns hardest hit by corporate fascism. When a corporation can own an entire town and do what ever they please, justice be dammed—and do it openly, not even try to hide it, and get away with it, then you know we’re in trouble.
Between the Emergency Manager system in Michigan that turns public assets over to the corporations and things going on in Flint, Detroit, and here—it’s a huge warning for everybody of things to come. Precedents set here will be going on all over the country. It’s looting in the name of legality. What’s legal is not what’s right; and sometimes what’s right is not legal. One has a responsibility to disobey unjust laws.
A lot of people don’t stand up. People are still trying to hang on to their comfort and hope things will get better and that the American Dream is still alive. But the American Dream is false. Everything is rigged. Electronic voting machines can be rigged. It’s good to see a lot of people out here trying to change things by voting. But we have to realize that maybe this voting thing isn’t all that’s needed. We have to be strong on all fronts and be adaptable and put ourselves out there in multiple avenues in order to seek justice in creative ways—because there’s a whole lot of FEMA camps waiting to be filled. I think this is the direction things are going. Now they’re talking about making prisons into communities. You are talking about a legal martial law—unannounced. You’re talking about some sneak thief bull-shit. Keep your eyes open and get people you know involved. First they ridicule you and then they attack you, and then you win.
We encourage reproduction of this article so long as you credit the source.
Copyright © 2016 People's Tribune. Visit us at http://peoplestribune.org
Posted by Gordon