The vicious, cowardly attack on democracy in Benton Harbor 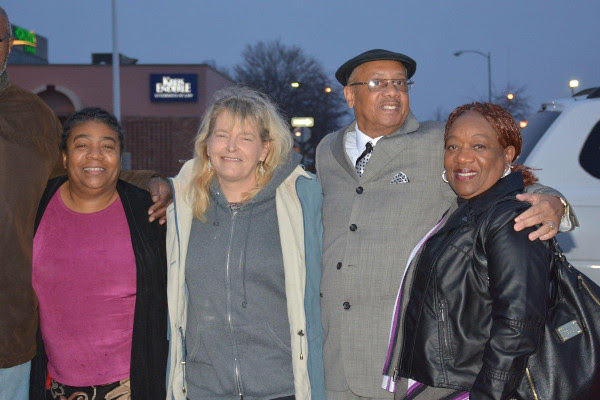 Rev. Pinkney and supporters outside Berrrien County Courthouse on the day of his sentencing. Left to right: Marcina Cole, Pati Heinz, Rev. Pinkney, Dorothy Pinkney.
PHOTO/MARCINA COLE
COLDWATER, MI — The vicious, cowardly attack on democracy in Benton Harbor, Michigan, shows that the corporate power structure is determined to crush anyone that stands in its way. The Whirlpool Corporation and government joined together to destroy the people of Benton Harbor. We call it fascism. It is part of the process underway across America in various forms. The once stable working class of Benton Harbor was devastated by automation and globalization and the community began to resist. They have to contain the struggle.
We live in a failed system. Capitalism has no solution to poverty. It does not permit an even flow of economic resources. A small privileged few are rich beyond one’s imagination, and almost all others are doomed to be poor at the same level. It is rich against the poor, the haves against the have-nots, and them, the rich, against the rest of the world. The time is revolution.
But like Rip Van Winkle who (so the story goes) slept though the American Revolution, today there are those among us who are sleeping through today’s revolution. There are those among us who are missing in action. We have to wake up! Today’s revolution is for human rights, freedom, justice and to do away with poverty. Any system that will not feed, clothe and house its people must be overthrown. It is like a monstrous octopus, spreading its nagging tentacles into hamlets and villages all over our world. Over 2/3 of the people of the world will go to bed hungry tonight; they are ill housed and ill nourished, without shoes and shoddily clothed. It is in Latin America, Africa, Asia and right here at home in Benton Harbor, Michigan.
We are demanding that America be true to the huge promissory note it signed years ago. The revolution will not wait. It will not slow down because some claim that progressives like Rev. E. Pinkney are “moving too quickly.” I am here to tell you we can win and will win.
Let’s make this struggle a victory for all who are victims of the economic crisis in every city and town in America. Let’s make the invisible visible: the poor—whether Black, white, red, brown, yellow, and all other people. Let’s take control of this country away from the corporations and build a society where the people, not the corporations make the decisions. The revolution is now. We can win.
We encourage reproduction of this article so long as you credit the source.
Copyright © 2015 People's Tribune. Visit us at http://peoplestribune.org
Posted by Gordon