Pinkney jailed for being a spokesperson for the poor

From the editors of the People’s Tribune 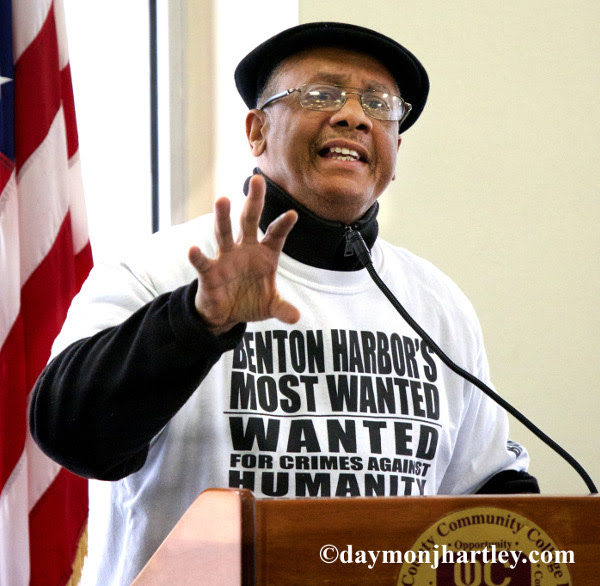 Rev. Edward Pinkney speaks at a Detroit event to discuss plans to fight the mess banks and corporations have forced on the cities.
PHOTO/DAYMONJHARTLEY

Rev. Edward Pinkney, convicted without evidence of changing dates on petitions in a recall election of corporate-backed Mayor James Hightower, is filing a motion to be released from prison pending the appeal of his conviction. That they have refused to allow him to remain free while his appeal is pending shows how much they want him silenced.

At the center of it all is the Whirlpool Corporation, the largest producer of household appliances in the world, and the dominant political force in the area. While it’s international headquarters is in Benton Harbor, they ceased production there long ago. The electronic automation revolution that has been going on for decades affected not just Whirlpool, but all manufacturing in Benton Harbor (and the surrounding area) and decimated the job market. As jobs left, in exact proportion, poverty, hunger, destitution and homelessness increased.

A once thriving working class community of more than 20,000, it is now being economically transformed into a population less than half that size with a growing new class of impoverished workers who are permanently under-employed and unemployed. At the core of this new class are the homeless and completely dispossessed workers. It is Reverend Pinkney who has been the most vocal spokesperson for their interests. It is for this reason that he has been railroaded to jail.

This is an attempt to silence the demands of the new class for food, clothing, housing, health care and education and a new society that provides for their interests. The fascist control of our society by private corporations like Whirlpool, now merged with the government, will not allow these demands to be met. The problem can only be solved by public, not private ownership of the new and developing automated means of production so the necessities of life can be provided for all based on need. The struggle in Benton Harbor is a harbinger for all of society.

We encourage reproduction of this article so long as you credit the source.
Copyright © 2015 People's Tribune. Visit us at http://peoplestribune.org
Posted by Gordon