On the significance of the Rev. Edward Pinkney trial

From the Editors, People’s Tribune
November 2014 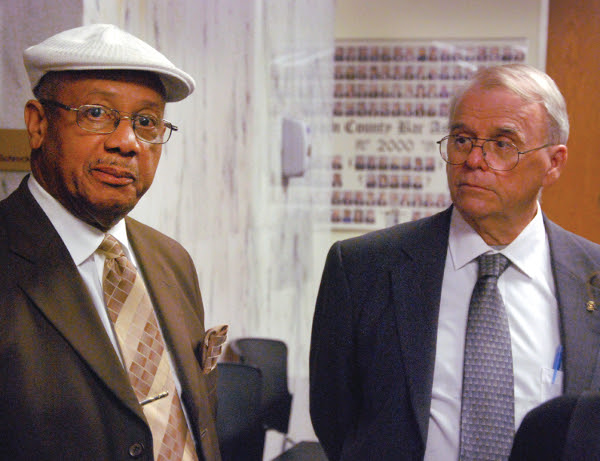 Rev. Edward Pinkney and his attorney, Tat Parish, in the courtroom where, with no evidence, Pinkney was found guilty of vote fraud. Photo credit/John Madill

It was a sad day for justice in America. Rev. Edward Pinkney, a staunch leader in the struggle for justice and for the needs of the poorest workers in the community of Benton Harbor, Mich., was convicted of changing dates on petitions for the recall of a mayor that the community believes is a ‘yes man’ for Whirlpool. There was no evidence to convict him. This case is about Rev. Pinkney’s political activity on behalf of the people and against the corporations. For this he could be separated from his family and community for years.

This case shows the consolidation of the power of the corporations. For a long time, they have been setting aside the spirit of the Constitution. Now they are setting aside theword of it. They are trying to create a situation where you can’t stand up to them. When you run the risk of being thrown in jail for recalling a public official, it shows how dangerous the political environment is. How do you convict someone when there is no evidence?

Michigan is a test case and model for the complete fascist takeover of America. These situations are going to be happening more and more. We need to fight every attack wherever they arise. The question is: who is going to control society? Will the corporations control it in their interests or will the people control it in their interests? The future is up to us.
The People’s Tribune is your paper. Send your stories. We encourage our readers to send donations for Rev. Pinkney’s appeal. Send to BANCO, 1940 Union Street, Benton Harbor, MI 49022.

Statement from Rev. Edward Pinkney on the Verdict

The following will be published in the November-December, 2014 edition of the People’s Tribune. Visit http://PeoplesTribune.org

I could not believe they could find me guilty without one piece of evidence. This case is about more than an all white jury. It is also a class situation. They attacked me because of my class — I’m not rich. Now everybody in Benton Harbor is in jeopardy. They are saying they don’t need evidence to send someone to prison. We have to say enough is enough.  It’s time to take a stand.

Here, Whirlpool controls not only Benton Harbor and the residents, but also the court system itself. They will do anything to crush you if you stand up to them. That’s why it’s so important to fight this. I’m going to fight them until the end. This is not just an attack on Rev. Pinkney. It’s an attack on every single person that lives in Benton Harbor, in the state and around the country.

I thought the jurists would have enough heart, enough courage and righteousness to do the right thing. They didn’t just fail me. They failed everybody that lives in the city of Benton Harbor.
There was no evidence, period. The only thing they possibly had was that the petition belonged to me, but it went through several hands. They only had one target and that was me. Any time you live in a society that doesn’t take care of its people you have a problem. And that’s what we have here in Berrien County. I am standing up for the people.

We want them to understand this fight is going to continue with or without me. In that sense, I’m happy today because people can take a good look at this system. It’s a class war. It’s us against them. Rich against poor. That’s what it adds up to. The point is we have to take a stand. It’s about you, your children, and your grandchildren. I never thought for a minute that the system could be this broken and would go to this extreme. They could care less about you, me or anybody else. They only have one thing in mind. That is to make sure they protect the rich.

There’s a lot of things that we can do now. We are working on an appeal. We are continuing to fight this battle. We’re going to stand firm. This is all about the people.

Speaking Out on the Pinkney Trial

The following quotes will be published in the November-December, 2014 edition of the People’s Tribune. Visit http://PeoplesTribune.org

“We were very surprised by the verdict. I believe there simply was no evidence whatsoever that he did the deed. There might have been evidence that somebody forged the dates. The problem of course is that the prosecution was allowed to argue that it was circumstantial evidence. Circumstantial evidence, as close as I can tell, is just suspicion. There will be an appeal.” — Tat Parish, Attorney for the Defense

“It’s a modern day lynching. After hearing the ‘evidence’, it would seem that the decision was made before the trial began. They are looking at Michigan as a glove for dictatorship. And the predominantly Black communities are the test tubes. When you stand up against the largest manufacturer of appliances in the world, of course there will be a backlash. Also, Rev. Pinkney was accused of writing and changing my date on a petition when, in fact, I wrote my own date and changed it after realizing I had put the wrong date down.” — Mary Alice Adams, Benton Harbor Commissioner

“Benton Harbor is losing more and more ground. The school system is failing. Over at City Hall, things are manipulated. They’re giving off the land to the developers for nothing. With the arrests over the recall election, people are now afraid. They want people to say, ‘Don’t kick against the system.’ This is wrong.” — Emma Kinnard, Delegate, 3rd Ward, Benton Harbor

“They threw my testimony in the garbage. They don’t want to hear you. Rev. Pinkney helps people, especially young Black men. They are giving all these young men all this time for petty crimes. Everyone I know is getting 20 years or more. What are the children going to do? The parents, women are crying over their sons. What preacher besides Rev. Pinkney is there standing with the people?”  — Marquette Coates, defense witness

“The prosecution dragged 42 people into court to testify. Many were poor workers, visibly angry at the police harassment and threat to their rights. One witness told the prosecutor, ‘You’re trying to switch my story.’ Another said that police ‘tried to get me to say I signed a paper on two different days and I didn’t.’ In addition, at times it seemed like a community organization, BANCO, was also on trial. Witnesses were asked if they were a member, whether they had a membership card, who was at meetings, if Rev. Pinkney was the organization’s head, and what was talked about. All in all, the poorest among them stood up to this assault. This is an example of the peoples’ ongoing fight for a just society.”  — People’s Tribune