Why does Berrien County, Michigan need a 20-ton armored vehicle? 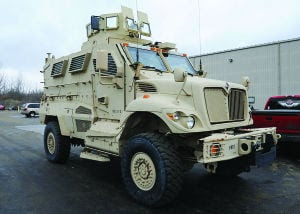 
The MRAP vehicle, for mine-resistant ambush protected, will be used by the department's Tactical Response Unit, which is called to confront shooters or handle other dangerous situations.

Don Campbell / HP staff
Sheriff Paul Bailey said the MRAP will be used in training the 26-member TRU team and will be available for quick response.
"It's nice that the military has this program for law enforcement so we can keep our county safe," Bailey said.
The TRU team trains to respond to various emergencies, among them a possible terrorist attack on the D.C. Nuclear Plant and other vital infrastructure. The sheriff's department also has a role in training exercises held by the Palisades Nuclear Plant in Van Buren County's Covert Township.
The MRAP will replace a 1970s armored vehicle, dubbed the Peacekeeper, which was acquired from the federal government years ago. That vehicle will go to the Niles Police Department, Bailey said.
The property program, operated by the Defense Logistics Agency of the Department of Defense, does not allow vehicles acquired by law enforcement agencies to be sold. They can be transferred to other departments.
The county Board of Commissioners is to approve a resolution accepting the vehicle at a meeting on Dec. 5.
Bailey said the MRAP modernizes the department's complement of armored vehicles. A Lenco Bearcat was purchased in 2011 with a $270,000 federal Homeland Security grant and local matching funds.
"Instead of the government scrapping it and taking it to the junkyard we'll get some use out of it," Bailey said.
Sheriff's Lt. Dan Jewell, commander of the TRU team, said the MRAP will mean mobility improvements. The 11-foot-tall vehicle, equipped with a rotating turret on top, will provide direct access to second floors of buildings in sniper situations, he said.
The vehicle can travel on or off road, and move at highway speeds.
After radios and other equipment are added and some interior changes made, the MRAP is expected to have a capacity of six or more TRU team members and their gear.
The vehicle is a 2008 MaxxPro, produced by Navister International, a heavy truck maker. It is diesel powered, has an automatic transmission and weighs nearly 20 tons.
Jewell said it saw use by the Army in the Middle East and arrived several weeks ago.
The sheriff's department and Berrien Springs-Oronoko Township Police Department both submitted requests for the vehicles.
Bailey said the Berrien Springs department was given the MRAP, but the smaller agency did not need it and transferred it to the sheriff's department.
MRAPs were developed for the Army and Marine Corps to protect troops from improvised explosive devices, homemade bombs often placed along roads in Afghanistan and detonated as vehicles passed. The hull is designed in a V-shape to deflect IED blasts.
saiken@TheHP.com
Twitter: @HPAiken