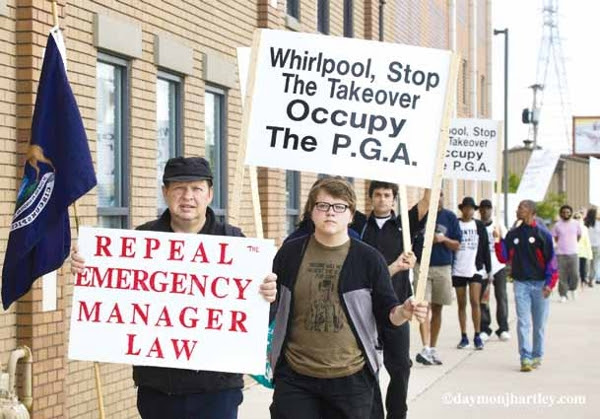 Protest against the corporations and bankers at the Senior PGA Championship tournament at the Benton Harbor golf tournament. Photo/daymonjhartley.com
Every American ought to have the right to vote and their vote should mean something. Everyone ought to have the right to clean air and clean water, to integrity and transparency in a democracy, but the citizens of Benton Harbor, Michigan, do not have a democracy. Public land is about to be stolen by corporate power.
Eminent domain—the power to take private property—is often used by the government or by a corporation that works hand in hand with the government to steal property from the citizens. In Benton Harbor, the Whirlpool Corporation, through the city’s new Emergency Financial Manager, Tony Saunders, (who represents Whirlpool, not the citizens) has come up with a scheme. It is to set up a Conservancy Board or Committee that will steal land without the knowledge of the citizens.
They plan to privatize all of Benton Harbor’s 16 parks and outsource all remaining land that Whirlpool does not control. The main parks they want have waterway access. Fisherman Park has a roadway straight to Lake Michigan. Hall Park lies along Ox Creek. Riverview Park is on the corridor along the St. Joseph River. This is simply a land grab. Whirlpool can’t buy the parks outright, so they are setting things up where everything goes through a board that they control. The Conservancy Board would be the new owners of the parks. The Conservancy Board doesn’t have to go through the City Commissioners. This is an underhanded way to get the rest of the land. The citizen’s will not have a say.
There are many questions that need to be answered: How many parks are recognized in the city of Benton Harbor? Where are the parcels located? What parks would be under the jurisdiction of the Conservancy? Will Jean Klock Park, beach and Fishman’s Park be included? How many acres of land do the parks equal? Will all of the parks’ land be under a lease and for how long? The Board must be a 501c3 but it is not. Why? The City Charter requires 2/3 or six votes to sell, lease or vacate roads or alleys. When will this process be introduced or implemented? Will there be a deed transfer? If so who will sign for the land to be released?
Mr. Tony Saunders: Are the city parks considered assets? Is there a budget for the Conservancy? Are their jobs associated with this initiative? If so, how many?  Will the specifications go through the Planning Commission or the Planning Economic Development Committee? How will the park Conservancy Board, which is made up of all Whirlpool supporters and Benton Harbor haters, comply with the charter, as it relates to the Benton Harbor elected officials and the citizens?
It is exceedingly important that this initiative be vetted and filtered through the Public Safety and Parks and Recreation Committee so that the people will have a say. Right now the people do not have a say. It is time for the people to take a stand. Get involved. Save your community from complete corporate takeover.
http://peoplestribune.org/pt-news/2013/06/whirlpool-emergency-manager-move-control-benton-harbor-parks/