The Dictators and Billionaires Take Control 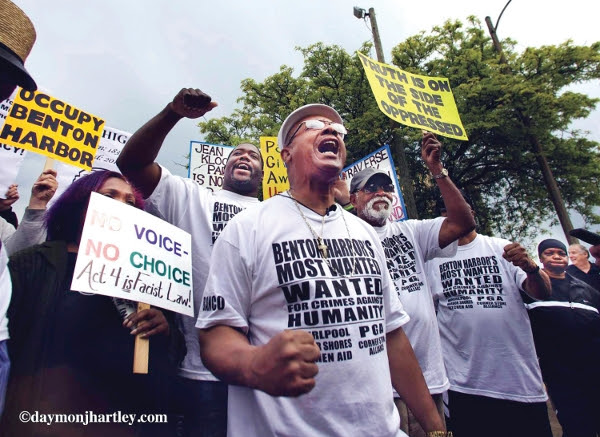 Palm Sunday gathering in Chicago calls for a real remedy to violence. Photo/deBorah mccoy. Photo/DaymonJHartley.com
The Whirlpool Corporation has unveiled a plan to completely gentrify downtown Benton Harbor, Michigan. This is being accomplished with the aid of the new Emergency Manager, Tony Saunders, who has a shopping list of things Whirlpool wants completed. The last Emergency Manager failed Whirlpool’s test. Whirlpool went to the governor to have him removed. Saunders was put in his place.
The Whirlpool Corporation designed the Harbor Shores project, hailed by the media and the white business community as a revitalization of the city of Benton Harbor. They told the community that the project would bring jobs. It was really an unprecedented opportunity to make a lot of money at the expense of an impoverished community.
The city of Detroit is facing the very same problems with their new dictator. The city of Benton Harbor and Detroit are under a vicious fascist attack by Governor Rick Snyder and his rich buddies, known as the billionaires.
Dan Gilbert, the multi-billionaire owner of Quick Loans, and a member of the Business Roundtable, has been meeting with Detroit’s new Emergency Financial Manager Kevyn Orr under Public Act 436, which gave Orr total control. Gilbert also owns a number of sports teams, including the Cleveland Cavaliers. He has plans to transform several Detroit streets and thoroughfares into pedestrian walkways with shopping districts around 22 buildings Gilbert has purchased. Several of the buildings are historic. All were purchased at bargain prices. Gilbert’s company also is providing seed money for digital companies. Detroit is seen as a major future home for that industry. Such companies hire very few workers.
An Emergency Manager has also been placed in six cities and three school districts across Michigan. None of the Emergency Managers work for the citizens. They work only for the corporations.
For example, the Benton Harbor Public Safety officer and Chief Roger Lange reduced the Benton Harbor Fire Department down to three full time firefighters from ten.  They worked hand in hand with the Emergency Manager. Recently Lt. Doug Bell was severely burned in an early morning fire at 1034 Jennings Ave. Bell was the only firefighter on duty when the call came in. How can one person put out a fire? The standard procedure is for two fire fighters to be inside a burning structure and for two to be outside monitoring the scene. The fire department has been destroyed by the cuts. In addition, Benton Harbor city workers saw more benefits cut, including 12 holidays. Their insurance contribution was trimmed and Saunders is promising more cuts in a series of emergency financial orders.
People need to stand up and fight. A new world is possible.