One of the many, many Benton Harbor victims of Whirlpool

Owen Barnaby, a friend and supporter of Rev. Pinkney, joins the huge club of Whirlpool Victims.

Rev. Pinkney asks that you subscribe to Barnaby’s youtube show.
Whirlpool (multi-billion dollar transnational) Corporation did what it could to ruin Mr. Barnaby.  Why?  Because he stood next to and supported Rev. Pinkney and his persistent work
for Benton Harbor over decades.
Whirlpool's method was to use coercion to run Barnaby out of town.  They forced him to pay TEN years worth of back taxes on the several nonprofit organizations he founded.  Nonprofits don’t pay taxes, but according to one of the most racist corporations in the world, with a large team of lawyers, they do.
One of Barnaby’s non-profits was a home for released prisoners.  (And we know it’s the full-time occupation - obsession - of ALL of BH, St. Joe, and Berrien County law enforcers, the courthouse and all working within, numerous attorneys, Rep. Fred Upton, and many St. Joe residents, to incarcerate or ruin as many BH Black people as possible.)
They took his several buildings and his home. He left BH for a southern state where he now lives.
Owen Barnaby has several university degrees and is a minister.
Rev. Pinkney has always valued his kindness, solidarity, and his intellect.  Barnaby allowed Pinkney to hold his meetings in his buildings for many years.
If you could listen to one of Mr. Barnaby’s shows and hit
Subscribe, it would be of great assistance to him.
https://www.youtube.com/watch?v=ftb_W4wWbG4&t=388s
Thank
T
Attachments area
Preview YouTube video Elon Musk and Jeff Bezoe Space Projects |Episode #1 of 100] ‘THE SECRET TO LIVE FOREVER "HAPPILY" ’ 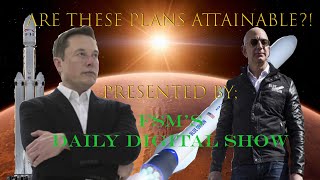