Colin Kaepernick Honored by ACLU with Advocacy Award; May Become TIME 'Person of the Year' 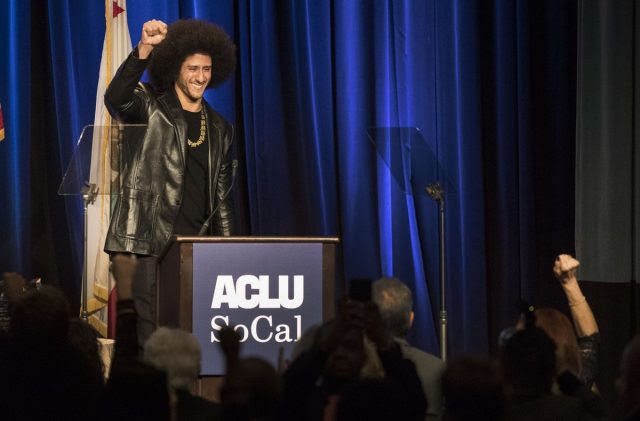 Sporting News
By Arthur Weinstein
“Human rights cannot be compromised”  — Kaepernick
#FREECHARLESLEWIS, #TAKEAKNEEFORCRIMINALINJUSTICES #https://www.facebook.com/groups/1512572892145578/
Dec. 4, 2017
Less than a month after being honored by GQ as its “Citizen of the Year,” Colin Kaepernick has earned another award for his work on social justice issues.
The ACLU honored Kaepernick on Sunday at the organization’s annual Bill of Rights Dinner in Beverly Hills, giving him the Eason Monroe Courageous Advocate Award.
Although the former San Francisco 49ers quarterback began his national anthem protests in 2016, he’s earned more recognition for them this season, even though he’s not currently in the league. Those protests have become a political flashpoint between President Donald Trump, athletes and progressive groups, with conservatives heavily opposed to the protests.
According to the Los Angeles Times, Kaepernick’s appearance at the ceremony, and the award, were a big surprise to the audience. He received a standing ovation.
Hector Villagra, executive director of the ACLU of Southern California, praised Kaepernick for taking a stand.
“He has lost his job, one that he loved and was supremely talented and skilled at,” Villagra said, via the Times. “He took a stand knowing that some would criticize him, and he has been viciously and unfairly criticized. He has been called a traitor because too many people in this country confuse dissent for disloyalty.”
“We all have an obligation no matter the risk, and regardless of reward, to stand up for our fellow men and women who are being oppressed with the understanding that human rights cannot be compromised,” Kaepernick said in accepting the award.

Kaepernick a Finalist for “TIME” Person of the Year 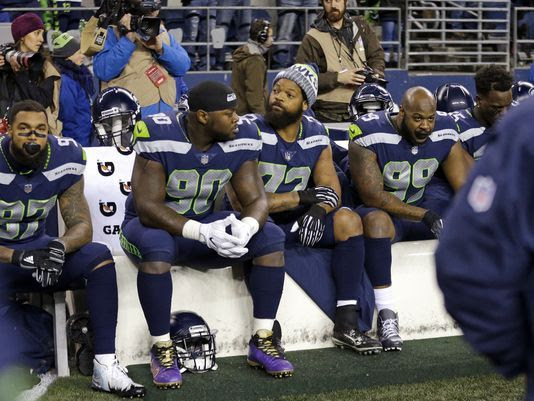 Seattle Seahawks’ Michael Bennett (72) sits on bench with teammates during the national anthem Dec. 3 before game against Philadelphia Eagles. The Seahawks trounced the Eagles.
Free-agent quarterback Colin Kaepernick was announced Monday as one of 10 candidates for TIME’s Person of the Year for 2017.
Kaepernick, who last played for the San Francisco 49ers in 2016, joins President Donald Trump, special counsel Robert Mueller and the #MeToo movement, among others, on the short list for recognition. Each year, the magazine strives to identify “the person or group of people who most influenced the news during the past year, for better or for worse.”
Trump was recognized by the magazine in 2016, and German chancellor Angela Merkel was its 2015 recipient. TIME will announce its latest “Person of the Year” on Wednesday.
Kaepernick was the first NFL player to take a knee during the national anthem last year, describing it as a means of protesting police brutality and racial inequality in the United States. He became a free agent in March and has yet to sign with an NFL team this season, prompting him to file a collusion grievance against NFL owners.