In the American criminal justice system, justice is totally absent. There is no such thing as justice in America for the poor. The criminalization of U.S. citizens by the injustice system is now one of America's largest industries. Prisons have been privatized and inmates comprise cheap labor for big corporations. 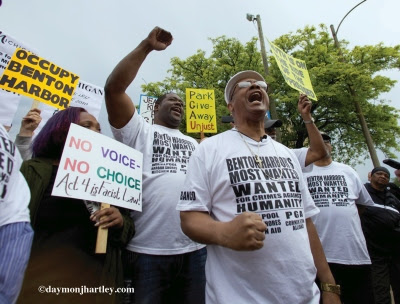 On July 11, we will gather at 10:30 a.m. in front of the Berrien County Courthouse (811 Port St., St. Joseph). We will march, and at noon we will protest in front of Whirlpool Headquarters. The state of Democracy is detestable, and we are not about to sit back and let it continue its course. Corporations' interests are not above the rights of every day human beings like you and me.

Whirlpool Corporation is responsible for the death of 79 people in London and we must stop the hostile takeover of the city of Benton Harbor. They must be held accountable to the people.

Let's confront the criminal justice system and the corporations that are destroying our country!