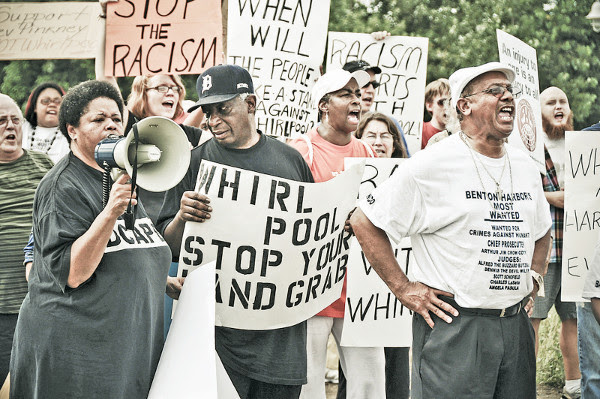 Rev. Pinkney leads a march against the development of the public Jean Klock Park, where a private golf club and luxury housing has been built, pushed through by the Whirlpool Corporation’s money and power.
PHOTO/BRETT JELINEK, OLAFIMAGES.COM

BROOKS/FREMONT CORRECTIONAL FACILITY —  Let the truth be told. Capitalism generates inequality and wealth, status and power. You must recognize the unfairness of a system that allows wealth to accumulate to an unlimited degree and claim to provide equal opportunity for the people. It is a system that undermines democracy by concentrating power and wealth in the hands of a few.
The oppressor is the establishment, which operates the system that oppresses the people. The establishment no longer needs educated workers as it once did. It once took 50 people to make one automobile. Now one person makes 50 automobiles. Education is the last thing on the oppressor’s list for the minorities.
The factory jobs previously provided were for workers of the predominantly Black Benton Harbor and the predominantly white St. Joseph (across the river). The jobs provided stability and a good standard of living. Then in the 1990’s, a pattern typical of the Rust Belt, emerged. The jobs began to disappear. Jobs were replaced by globalization, sent elsewhere, or replaced by robots.
Whirlpool Corporation, a global appliance manufacturing company, is the largest single employer and single biggest political influence on local government in Berrien County, MI. Whirlpool controls the county commissioners, Berrien County Courthouse, its judges and prosecutors, Benton Harbor Commissioners and Benton Harbor School District and Board.
Whirlpool set its sights on turning the city of Benton Harbor into a lakeside resort for the wealthy. Whirlpool and other corporations teamed up and began transitioning the area from an industrial based economy to a tourist, real estate and service-based economy. First, they built a $500 million arena plus the Jack Nicholas Signature Golf Course complex that would take 465 acres of Benton Harbor and deprive the city of its greatest assets, which includes Jean Klock Park.
Whirlpool no longer needs educated workers from Benton Harbor. Whirlpool Corporation now plans to close all of Benton Harbor schools. The city of Benton Harbor is down to five schools and now Whirlpool and Gov. Rick Snyder are going for the throat to close three more schools.
I Rev. Edward Pinkney have for years gone to school board meetings to tell the board what needs to be done to educate the students and that parents must get involved. I am afraid the parents, teachers and school board members have been misled and lied to by Whirlpool. Now we have three schools closing, overcrowded classrooms and there is no telling what kind of education the children will get. In addition, the school system has gotten many loans from the state. Where is that money? Who is responsible and accountable for our students’ education? Who is responsible for the attack on our school system?
The Whirlpool Corporation is determined to crush the residents of Benton Harbor. The economy and social equality is the essence of democracy and is the antithesis of capitalism. We must confront the Whirlpool Corporation at all cost.
We encourage reproduction of this article so long as you credit the source.
Copyright © 2017 People's Tribune. Visit us at http://peoplestribune.org
Posted by Gordon