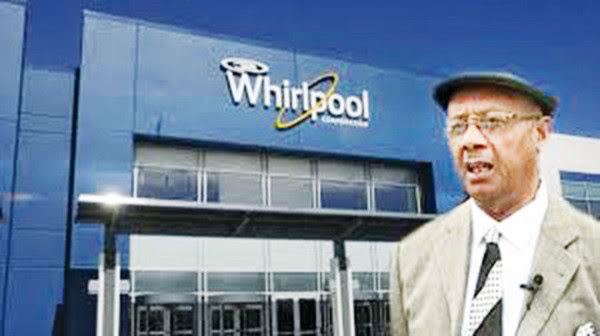 BROOKES/FREMONT PRISON, MI —The Whirlpool Corporation has committed genocide in Benton Harbor, Michigan. Genocide is the deliberate and systematic destruction of a group of people, especially of a particular ethnic group.
Benton Harbor is over 90% Black and over 60% of the people live in poverty. Benton Harbor has rich lake Michigan beachfront property and parks. The Whirlpool Corporation, which rules the region, joined forces with the government to steal the town’s property and to systematically eliminate the residents of Benton Harbor by any means necessary.
Whirlpool is known for its leading role in the gentrification of the city. Gentrification is a process of renewal and rebuilding with an accompanying influx of affluent people to a deteriorating area. Gentrification often displaces and destroys poor residents.
US Congressman Fred Upton, heir to the Whirlpool Corporation’s fortune, voted to give Whirlpool a welfare check of $500 million to save the corporation. This shows the merging of the corporations and government. We call it fascism. What do you call it?
Whirlpool is among the major corporations that control the state legislature—which passed Public Act 4. This act turned the Emergency Financial Manager into the Emergency Manager, giving corporations broader powers to overrule elected officials and take control of cities and school districts.
Benton Harbor was one of the first cities to have an Emergency Manager, thanks to the power of Whirlpool. Emergency Managers can replace local officials, sell public property and assets, privatize public services, dismantle collective bargaining agreements and more. They are dictators in the service of the corporations. The Whirlpool Corporation is a dictator in Benton Harbor.
The Benton Harbor Parks Conservancy Board works directly with Whirlpool against the people of Benton Harbor. The board is a potentially disastrous instrument used against the people of Benton Harbor. It is a non-profit organization created by Whirlpool to manage and dissolve 13 parks in the city.
Whirlpool controls all of Berrien County: the courthouses, Benton Harbor commissions, Benton Harbor city government, the Conservancy Board, even the fascist media, Herrald Paladium. Whirlpool is a poster child of the post industrial destruction of the manufacturing we once knew.
As the economic crisis continues to deepen and grip America, people in working class communities across the country, especially in former industrial towns like Benton Harbor, are beginning to stand up and demand that the government serve the people’s interests, not the corporations. As the people stand up, they come under fire from the corporate-government. This is especially true in Benton Harbor. The city of Benton Harbor and leaders of the people, such as myself, have felt the wrath of Whirlpool Corporation.  We must confront the corporations.
We encourage reproduction of this article so long as you credit the source. Copyright © 2017 People’s Tribune. Visit us at http://peoplestribune.org
We encourage reproduction of this article so long as you credit the source.
Copyright © 2017 People's Tribune. Visit us at http://peoplestribune.org