By the People’s Tribune

July 26, 2016 marked the 588th day that Rev. Edward Pinkney of Benton Harbor, Michigan, has been in jail for allegedly changing dates on an election recall petition to oust the town’s mayor.  On that day, the Michigan Court of Appeals upheld his conviction by in effect saying there was sufficient evidence without proving the charges. The Court negated witness testimony that someone else committed the crime by stating Rev. Pinkney aided and abetted that person through his political activity against the Whirlpool Corporation and their puppet Mayor James Hightower. 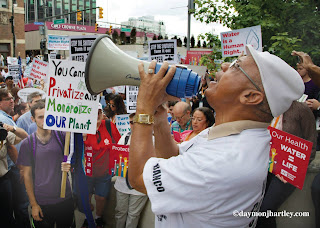 The community of Benton Harbor, led by Rev. Pinkney, exposed corporate rule through political activism. In a desperate move to stop a recall election they were going to lose and quiet opposition, corporate rule in Michigan reached into the past and resurrected the old kangaroo courts of the Jim Crow South where evidence, justice, innocence and being judged by a jury of one’s peers had no meaning. Less than a year after Rev. Pinkney was convicted by an affluent all white jury, the court of public opinion—Benton Harbor’s citizenry—gave its verdict by defeating the corporate mayor Hightower in the general election by a landslide margin. While this victory vindicated Rev. Pinkney, he still remains in jail.

In essence, the ruling of the Michigan Court of Appeals makes political activity against corporate rule in and of itself a crime. After this ruling, if you are an activist in the state of Michigan, you are guilty until proven innocent instead of innocent until proven guilty. At present, no other state has advanced fascist corporate rule as far as the state of Michigan has, with its emergency manager system. Emergency managers are sent to Michigan cities to replace mayors and city councils nullifying them as elected officials. They make the city’s publicly owned land and assets the private property of corporations. Emergency managers do the bidding of corporations like Whirlpool. It is this dictatorial emergency manager system that Rev. Pinkney and his community exposed and stood up to.

As this case illustrates, we, the people are living in a new era. Corporations are taking over the government on every level. Underlying this change is new labor replacing technologies (robots and computers) that are creating massive, permanent unemployment. The government is changing its form of rule from democracy as we have known it to dictatorship in order to maximize corporate profits and protect their property. The result for the workers, those who industry no longer needs, is seen most vividly in Flint where an entire city has been poisoned and people are left to fend for themselves and die. It is this section of the population that Rev. Pinkney has always—and continues—to fight for. And it is activists fighting for the rights of this section of the population in Michigan and elsewhere, such as those fighting for water rights, housing, and for democracy itself, who are being targeted by the government for their activity on behalf of the people. The corporate government cannot allow this section of the population to congeal in a common fight, not only for their right to survive, but also for a new society where corporate property becomes public property.

Take the situation in Michigan and Rev. Edward’s Pinkney’s case into the electoral arena!

For more information on this case, visit BHBanco.org or PeoplesTribune.org


We encourage reproduction of this article so long as you credit the source. Copyright © 2016 People's Tribune. Visit us at http://PeoplesTribune.org