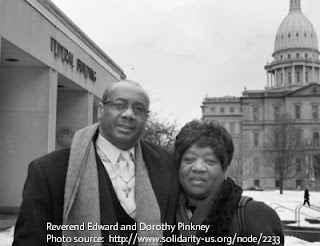 June 20, 2015 - Rev. Edward Pinkney has been deprived of his liberty for the last six months. Among the most fearless fighters for Black people and poor people in Michigan, he sits in prison falsely accused of vote fraud, separated from loved ones and community, in a blatant case of state repression. The charges stem from a campaign to recall the Benton Harbor mayor who opposed an income tax that would have generated desperately-needed revenue for the city from Whirlpool, Inc. By imprisoning Pinkney, the officials of Berrien County and their corporate master, Whirlpool, hope to intimidate, subdue, and silence the people of Benton Harbor.

Rev. Pinkney’s spirit isn’t so easily broken. According to his wife Dorothy, who speaks with him twice a day to monitor his health and wellbeing, he is “himself”—meaning dynamic, irrepressible, indomitable, still organizing, both inside and outside the prison walls. But unless and until he gets free on appeal, there are urgent needs we can help with right now.