“We can win this fight,” says Rev. Pinkney from prison 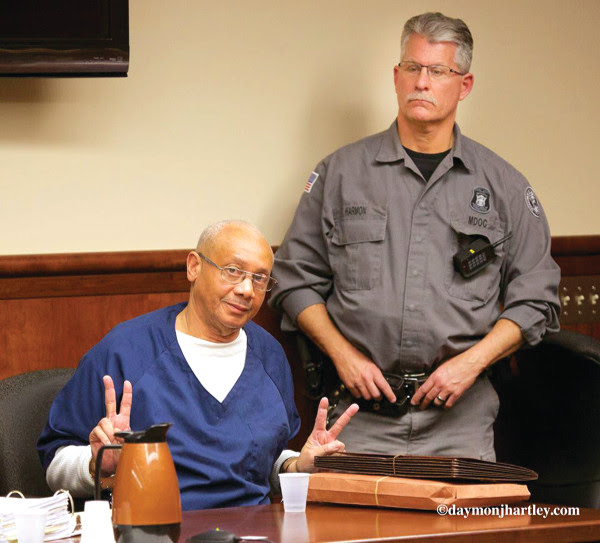 jRev. Edward Pinkney was handcuffed and ushered into the courtroom on the MONJHARTLEY.COM
Editor’s note: Reverend Edward Pinkney wrote this article from prison. He remains enthusiastic about winning this fight, despite the concentration camp-like conditions he and the other prisoners are living under. He says over 150 people use the same bathroom, about five people are living in 9 x 12 cubes and he wouldn’t feed the food to a dog.
COLDWATER, MI — I, Michigan political prisoner, Rev. Edward Pinkney, am a victim of injustice. I was sentenced to 2 1/2 to 10 years for supposedly changing the date on five recall petitions to recall Benton Harbor Mayor, James Hightower. No material nor circumstantial evidence, no eye witness, and no confession was presented at the trial that would implicate me in the five felonies. Many believe that I, an international activist and leader of the Black Autonomy Network Community Organization (BANCO), am being punished by the local authorities for opposing the corporate plan of the Whirlpool Corporation, headquartered in Benton Harbor, Michigan. I say this is an opportunity to expose the Benton Harbor courthouse criminal enterprise and let the world know there is corruption from the top to the bottom of the totem pole where a lynch mob mentality reigns.
The Benton Harbor corporate structure has used similar charges to stop past efforts to recall or vote out of office public officials. In a majority Black city, as many Christian ministers do, I have always quoted the scriptures. I was even convicted for quoting scriptures in the People’s Tribune newspaper. This outrageous conviction was overturned on appeal. We must do this again. Rev. Edward Pinkney has become the face of resistance to the nation that the working class has no rights that the corporations are bound to respect. Any and all efforts must be made to overturn the charges against me as a step toward overthrowing the spread of this model to the rest of Michigan and the nation. This is not Black versus white, it is the haves against the have-nots, the rich against poor.
Any time you have an economic system that refuses to feed clothe and house it people, it must be overturned and replaced with a system that meets the needs of people.
We will win. God to me is knowing how and when to gather stones to fight for the truth. I believe that humans are not all evil, just misled. We will win this fight because humanity is greater than those that will destroy it. We will win because it has become clear to the people just who the enemy is and the solution is so simple.  A mass movement demanding a changed economic system, one that meets the needs of the people, not the corporations, is needed. We can win.
http://peoplestribune.org/pt-news/2015/04/we-can-win-this-fight-says-rev-pinkney-from-prison/
Posted by Gordon