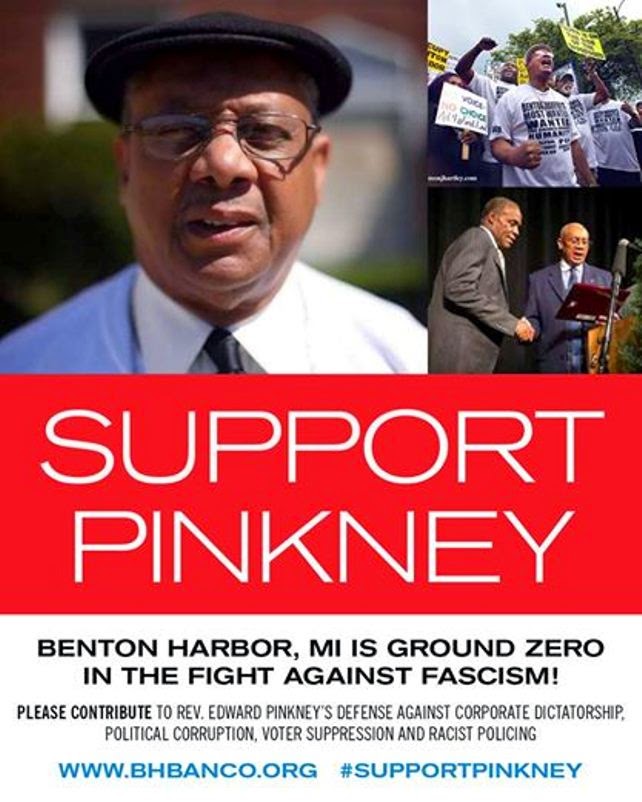 Reverend Edward Pinkney, grassroots leader of the  Black Autonomy Network Community Organization (BANCO) in Benton Harbor, Michigan, was convicted on Nov 3rd of five felony counts of election law violation. He was accused of changing dates on five petitions in a recall campaign against the city’s mayor, a mayor who sides with big business –Whirlpool Corporation is based there – against the people. He was convicted with no supporting evidence by an all-white jury – both violations of justice; which amount to legal lynching Benton Harbor is 96% Black yet there was not one person from Benton Harbor on the jury.


Rev. Pinkney, who has a history of calling out racism and corruption of the city’s power brokers, says of this latest miscarriage of justice, “They are saying they don’t need evidence to send someone to prison. Now everybody in Benton Harbor is in jeopardy. We have to say enough is enough. Whirlpool controls not only Benton Harbor and the residents, but the court system itself. They will do anything to crush you if you stand up to them. That’s why it’s so important to fight this.”

Background:
u Whirlpool Corporation has its world headquarters in Benton Harbor. The city of St. Joseph, across the river, is nearly all white with an income about 3-4 times that of Benton Harbor residents. The people of Benton Harbor have had to confront racism, corruption, cross burnings and a land-grab of river and lake front property forcing local residents out. Rev. and Mrs. Pinkney and the Black Autonomy Network Community Organization have lead many protests against these injustices and petition drives to recall local officials.
u  Rev. Pinkney’s activism has made him a target; his arrest warrant on recent non-violent charges was served by a SWAT team that surrounded his home at gunpoint.
u  The recent trial seems like a re-run. In 2005 Rev. Pinkney led a successful recall election against a city official closely aligned with developers who had their eye on river and lake-front property. The power elite threw out the recall election results, reinstated the official in question and accused Rev. Pinkney of election fraud. In that case another all-white jury found Rev. Pinkney guilty despite lack of evidence or credible witnesses. He was to serve his time under house arrest. He was subsequently sent to prison for quoting the Bible! The judge said he considered the Bible quote a threat. Rev. Pinkney was released on bond after a national campaign.
What you can do:
Rev. Pinkney is appealing this outrageous conviction. His team needs to raise $20,000-25,000 for legal costs and to get the word out. Can you help?

Please donate, by clicking on Donate.

Ask how can a person be convicted of a crime with no evidence
and a jury that is motivated by something other than the truth?

And please share this information with everyone you know.