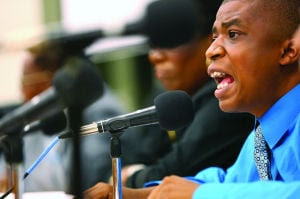 During a heated moment of debate at City Hall on Monday, Benton Harbor second ward Commissioner Trenton Bowens restates his belief in the city income tax and that the people's vote on the issue should continue as scheduled.

Tuesday, August 6, 2013
By LOUISE WREGE
BENTON HARBOR - Applause exploded in the standing-room-only audience after the Benton Harbor City Commission approved the city income tax ordinance 6-2 with one abstention.
City voters will decide whether to impose the tax.
"Enough is enough. It's simple. Let the people decide," said Commissioner Trenton Bowens, who spearheaded the idea, before the vote on the ordinance.
The wording that will go on the Nov. 5 ballot was approved 6-3. The ballot will ask voters if they approve of imposing a 1 percent tax on corporations and residents and a 0.5 percent tax on nonresidents who work in the city.
Voting for both items were Commissioners Bowens, Juanita Henry, Marcus Muhammad, David Shaw and Dennis Knowles. Voting against both items were Mayor James Hightower and Commissioner Duane Seats. Commissioner Sharon Henderson abstained from the first vote and voted "no" on the second measure.
Ten citizens also spoke about the city income tax idea before the vote, nine in favor and one opposed.
"It's an excellent opportunity for the citizens of Benton Harbor to get control of some funds so they can move the city forward," said Ralph Crenshaw, a former city commissioner.
"It potentially gives new life to Benton Harbor," said another resident.
"There's nothing more profound than an idea whose time has come," said former Mayor Wilce Cooke. "... Put it on the ballot. Let the citizens vote it up or down."
Resident George Moon said Benton Harbor is flooded by people who come into the city every morning to earn their living.
"None of them are staying in Benton Harbor. The money is going out with them," he said. "Why shouldn't we get a piece of that money?"
Former City Commissioner Eddie Marshall said that according to the city's master plan, 90 percent of the people who work in Benton Harbor don't live in Benton Harbor.
"Benton Harbor's problem can't be fixed with cutting alone," he said. "I asked (former Emergency Manager Joseph) Harris a couple of years ago what he was doing to generate income, and I'm still waiting for that answer."
One resident who spoke against the city income tax said most residents are on a skeleton income.
"If you have no more meat to give, you take bone. And when you take a bone, then I'm crippled," he said.
Seats said he is opposed to the city income tax because most of Benton Harbor's residents are poor.
"I don't have a problem paying it, but I do have a problem taxing poor people," he said.
Hightower said he is opposed to the city income tax because the residents just approved a millage rate hike in May, giving Benton Harbor the highest tax rate in Berrien County.
"I'm not going for it at this particular time," he said. "It's too much for citizens to bear ... 22 cities have a city income tax, but none of them are as poor as Benton Harbor."
If the city income tax is approved in November, the city will start collecting it on Jan. 1.
Bowens has said an impact study on the income tax will be ready later this month.
Muhammad has estimated that a city income tax would produce $2.5 million a year for Benton Harbor.
Email: lwrege@TheHP.com
Twitter: @HPWrege
http://www.heraldpalladium.com/news/local/let-the-people-decide/article_5dc78b08-8ccb-5f8c-a002-9502a7ec362f.html