BENTON HARBOR - The state should not have taken away Benton Harbor's right to vote, but the way to get back is to be unified, Nation of Islam leader Louis Farrakhan told an audience at Pilgrim Rest Baptist Church Friday evening. By KATE GENELLIE - H-P Staff Writer (http://www.heraldpalladium.com/news/local/justice-has-to-come/article_6645fd3e-818e-58d1-a9ac-8fd23b87e33e.html 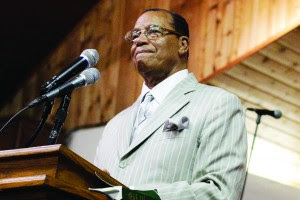 "Can any good come out of Nazareth?" Farrakhan asked during a sermon to an audience of about 400 people. The question, which was the title of his speech, echoed a question in the gospel of John about Jesus.

"Jesus came out of a bad part of Benton Harbor," Farrakhan said.

"We can unite Benton Harbor and make a powerful presence in Detroit and Lansing, and you will take back your city without ever using violence," Farrakhan said.

Benton Harbor residents may have elected their representatives, "but the government in Lansing said, 'No, that's not good enough,'" Farrakhan said, referring to the state takeover that happened when the Treasury Department appointed an emergency manager to the city.

It happened, Farrakhan said, "Because Whirlpool might want this side of town.

"They make it sound so good, like they're going to save the city," Farrakhan said. "The devil promises only to deceive. You should know that by now. It started with 40 acres and a mule."

Farrakhan said the method has played out before. Rich people find land they want and raise the taxes so that poor people have to move away, and then the rich people buy the land cheap.

Farrakhan commended controversial local activist Ed Pinkney for speaking truth to power, saying that though some people may call Pinkney a troublemaker, "if you're a slave, shouldn't somebody trouble the master?"

America has voted into office its first black president, Farrakhan said. "Because of that act, young children will never go to bed thinking they can only be basketball players."

But President Barack Obama is a black man elected to handle the affairs of white people, Farrakhan said. "This is their government, we live in it."

"Jesus ain't Obama, you know," Farrakhan said. "Jesus is not a Republican and he sure ain't a Democrat. When Jesus comes into the world, he comes with a government to replace the U.S. government.

"All governments are going to be sent down when Jesus comes. None of them pleased Jesus Christ or his father," Farrakhan said.

"What happened to us as parents that we lost control?" Farrakhan asked. He asked what happened to law enforcement that average people have to carry tasers and handguns as if they're in the jungle.

"Here we are in 2012 and the world is falling apart with us in it," Farrakhan said.

Jesus was not white, Farrakhan said. "Boy, he better come white, though."

Farrakhan said that if Jesus arrived at most white Christian homes as a black man, "You might have trouble receiving him."

He asked the audience whether they thought Jesus would forgive white people for being slave owners and the children of slave owners.

"White folks understand that justice has to come," Farrakhan said. "When you're sowing bad seed, the harvest has to come."

Farrakhan railed against genetically modified food, Planned Parenthood and putting faith in medical doctors, psychiatrists and psychologists instead of religion.

People are being monitored through their own devices, such as their cellphones and computers, Farrakhan said.

"If they find you just looking at a website that has pornographic material involving children, they arrest you on the spot," Farrakhan said. "You see, these are traps made by Satan."

Farrakhan said Friday was his 80th birthday. Despite his age, and despite the fact that he observes Ramadan and so hadn't eaten since before sunup, Farrakhan was energetic at the church Friday evening, shouting into the microphone and cracking jokes when an audience member's cellphone went off.
Posted by Gordon